Too busy to blog…

Seems I have been either seriously goofing off, or seriously working.  Either way, it doesn’t seem like I have had much time to blog, even though goofing off gives me so much blog material!

In the category of “goofing off”, I attended a cooking class held at Lavender, a French restaurant in Green Valley, AZ.  (This was just previous to the 2-day golf tournament I played with Mom, which …ahem… we won!   Please no sandbagging jokes). 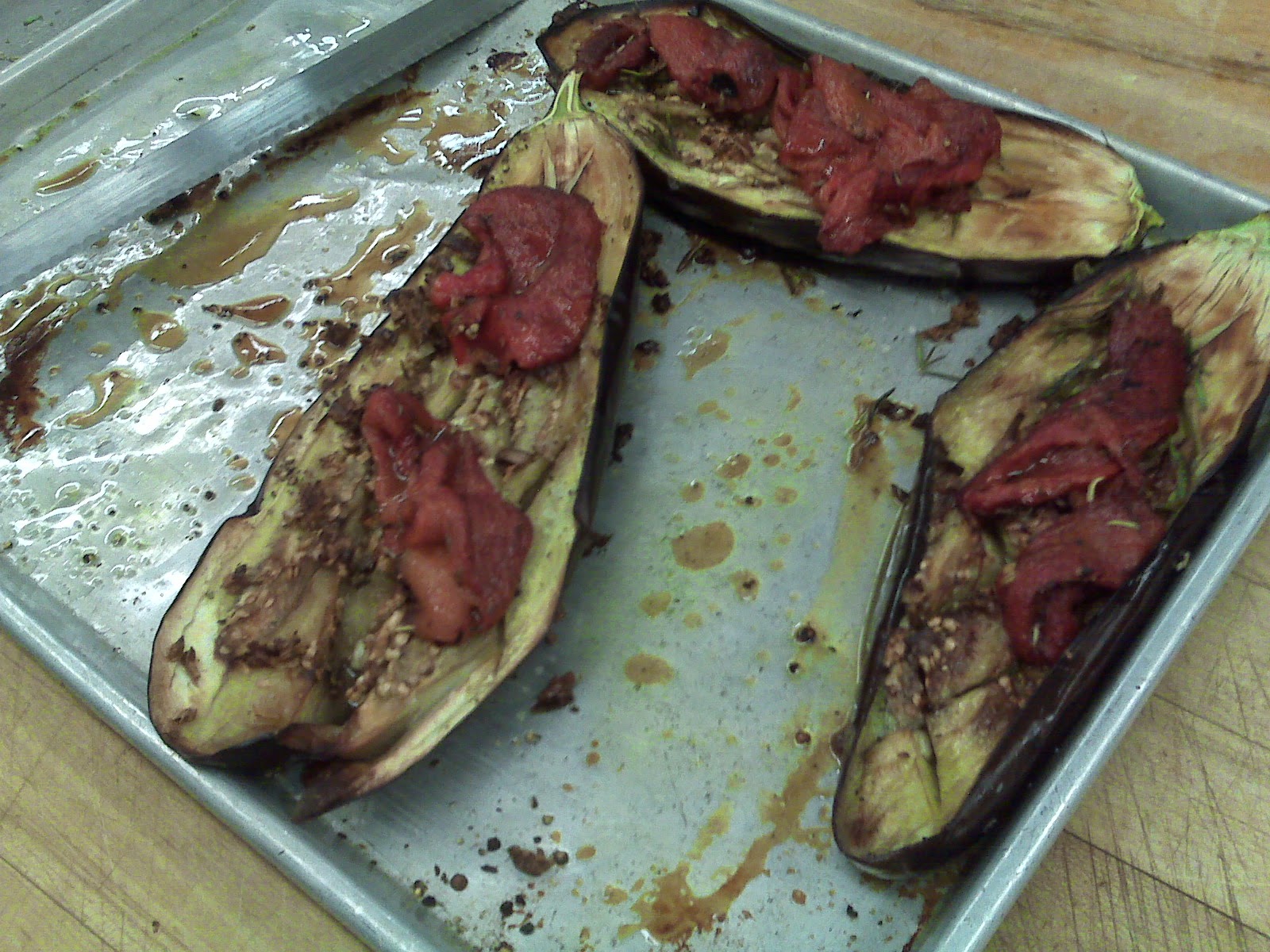 Lavender’s is at the Green Valley Country Club, and is open to the public.  It is owned by a husband and wife, Chef Frederic and Graciela Lange. I was impressed by the huge kitchen, and always happy to find some place that is cooking interesting food (sometimes it seems hard to find a restaurant that even really cooks). They do a great job on simple food – like the lunches for the golf tournament.   I still have not tried them for dinner (but will soon), and hope that the meals reflect what we saw in class – good ingredients, honestly prepared.

Chef Frédéric Lange prepared an ambitious list of appetizers in the 1 ½ hour class:

The eggplant dip was my favorite, and I now know how to easy it is to quickly cook large eggplants.   I like eggplant dips and occasionally make them when have friends over, they are a nice (and healthy) alternative to cheese and crackers, but have always struggled with cooking the eggplant.   The truffle calzone was just indulgent… mascarpone cheese and herbs and truffle oil.  And, even though I make pizza all the time, the pizza demonstration taught me a few new tricks.  Like AJ’s carries fresh yeast, and that you really don’t need to let the dough rise for an hour. That you really can put potatoes on a pizza, and that I need to use more liquid when I make my dough with the Kitchen Aid.  And another way to shape the pizza for serving small pieces for hors d'oeuvres.  The Croque Monsieur is French version a grilled ham and cheese, Chef Frederic jazzed it up with some thin slices of pear – and cooked in the oven which is a great way to do for a crowd.  The Brie with Caramel was fun to watch – mostly how to bring back caramel sauce from the brink of disaster (overcooking).

In the end, the best part of the class was watching someone who is a master – do the simple things like smash garlic, use a mandolin and knife -- while sharing their knowledge in a fun (and tasty) way.   Chef did not have written recipes…  most of these are things that are simple and you can make up as you go.  Following is my interpretation of what he prepared, and hope I have not forgotten anything too important (also, I have not yet tested these in my kitchen, so if something seems strange or missing, call me).

Slice eggplant in half the long way, leaving the stem on.  Score flesh in diamonds (3 to 4 cuts, through meat but not skin.  Sprinkle with salt, pepper, and garlic, making sure to get down in the cuts.  Drizzle olive oil on top, again, getting down in the cuts.

Next remove the eggplant from the skin:  make small cut through the flesh near the stem. Hold by the stem, and with a large spoon, scoop out the flesh.  Best to do this on a plate to catch the juice.  Place everything in a large bowl.  Stir and mash with a fork, intention is to keep chunky (rustic).  Add herbs and parmesan cheese, stir, then taste for salt, add more if needed.  To serve, place in shallow bowl, add more cheese and a drizzle of oil on top.  Serve with toasted fresh bread (crostini). 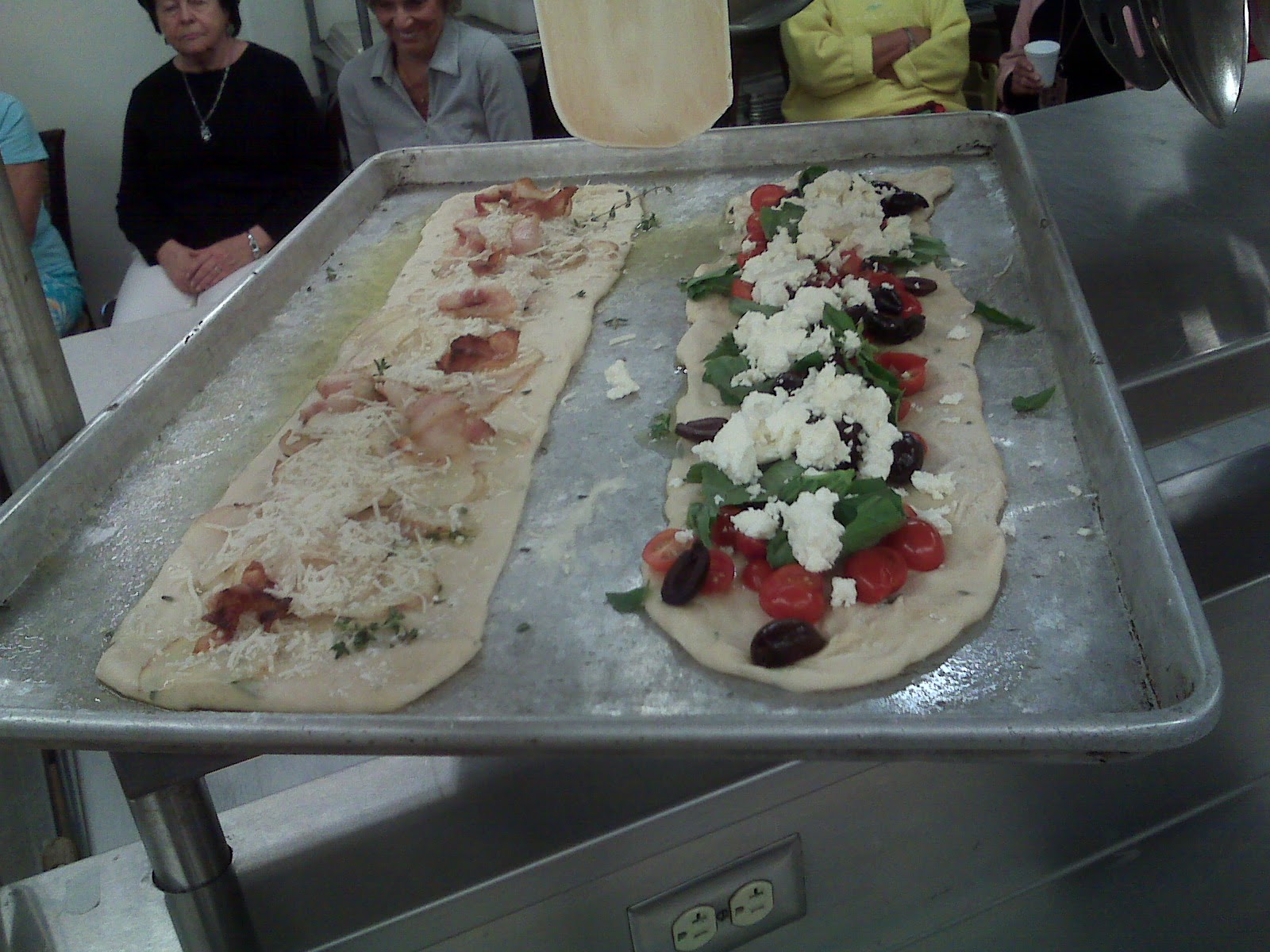 For the dough, the basic formula is 2 parts flour to 1 part liquid (water and oil).  You can also use dry yeast, but it will take less (my guess is ~ 2 full teaspoons based on my other recipe).

Dissolve yeast in water.  Place flour in bowl of mixer, add remaining ingredients.  Mix using stand mixer with dough hook until it comes together in a ball, about 3 minutes total.  Cut into 3 pieces.  Let the dough rest while you prepare the toppings (about 30 minutes or so).

On a floured board, roll each piece into a long rectangle (as long as a big cookie sheet).  Put some olive oil on a large rimmed cooking sheet, place the dough on the oil.  Add the toppings (see below for ideas), and bake for 12-15 minutes.  Cheese should be melted, and if you look underneath, the bread will be brown.

Remove from the oven and place on a large cutting board.  Slice in half the long way, then crosswise into 2 inch pieces.

Bacon and Potato  (enough for one long pizza)

Chop the bacon in 1 inch pieces, and cook in a small amount of olive oil.  Cook until fat has started to render, but bacon is still soft (it will get crisp later when on the pizza).  Slice the potato (no need to peel) into very thin slices, preferably with a mandolin.  Do just before using so they don’t turn brown.   Put some olive oil on the pizza dough, then salt (optional – for me the bacon and cheese provided plenty of salt), pepper and herbs.  Put on some cheese, the bacon, potato slices, some more cheese.  Optional – add some of the bacon grease.  Bake as directed above.  Garnish with more herbs if desired.

Greek (enough for one long pizza)

I have made one change.  Chef put the basil on last, and in the oven it turned brown to black (just the nature of basil).  When I put basil on pizza’s, I always put it on first, just after the oil, and it stays green and keeps its flavor.

Cherry or Grape Tomatoes -- about a pint, sliced in half
Olives (Kalamata or your favorite) – half a cup, maybe more
½ Small red onion, sliced
Garlic, 3 cloves, smashed and chopped
Feta cheese, about 4 ounces, cut in chunks
Basil
Olive oil

Put some olive oil on the pizza dough.  Don’t salt – the feta cheese will add plenty of salt.  Put some roughly chopped basil and garlic on the oil, then layer on the tomoatoes, olives, onions, and feta cheese.  Bake as directed above, then add some more chopped basil on top.

Roll half the dough into a 12 inch circle.  Place on oiled sheet pan.  Spread the cheese on the dough, leaving the outer inch of dough uncovered.  Top with herbs, cream and truffle oil.  Brush the outer edge with water.  Roll other half of the dough into a 12 inch circle and place on top. Crimp the edges.  Dock (make holes) with a fork.  Bake for 12-15 minutes.  Cut into wedges or squares to serve.

Originally served as fast food in French bars and cafes.

Spread each slice of bread with mustard.  Build sandwich in following order:   Ham, cheese, pear, cheese, ham.  Put butter on outside of each sandwich.  Place on sheet pan, and bake.  (I’m guessing on time and temperature, but I think 425 for 10 minutes… not sure if they turned them or not).  To serve as appetizer, cut into 6 - 8 squares, stick with a tooth pick in each square.  Place on a platter to serve.

Brie with Caramel and Pecans

Make caramel sauce:  mix sugar and water, and place on heat.  Do not stir.  Bring to a boil.  Brush some water on the pan just above the sauce to prevent crystallization.  Cook until it starts to turn brown (~10 minutes) and remove from heat.  It will continue to brown (if it starts to get too brown, add some water… this will splatter).  Cool slightly.  Arrange brie on rimmed serving platter, put a couple of handfuls of nuts on top and pour caramel over top.  Place inverted bowl over the top, and let sit for an hour or so (this should soften the caramel).  Serve with crackers.
Posted by Deb at 8:01 PM