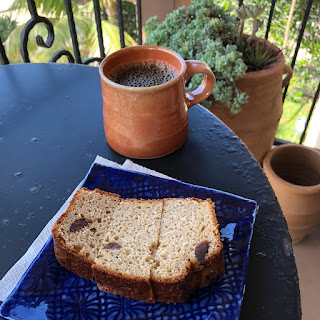 We eat lots of bananas at our house, but even so, we sometimes get caught with too many, and I need to find a way to use them up.  And people that know me, understand that I occasionally end up with bananas that have flown an extra 1000 miles or so.

The overripe bananas usually get used in Sunday morning muffins (which is another recipe I need to add to the blog). But I consider muffins something eaten before noon, not dessert.   For dessert, I make this. Still, it's not too sweet, and great for snacks, or to take sailing, or to a potluck. 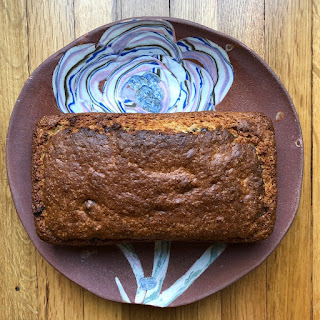 It's also easy to make.  "Easy" is a bit relative.  What might be easy for me, it more challenging for you.  But this is certainly easier to make than most desserts, and quicker to mix up than the muffins I normally make.  One of the things that makes this easy is mixing the wet ingredients with an immersion blender. (And if you don't have an immersion blender, you should get one). So one blender cup, one mixing bowl.  No food processor, or other tools or bowls to mash bananas.

Another thing that makes a recipe easy is a recipe that uses ingredients I already have.  Face it, I didn't plan for too many bananas.  So I haven't planned for anything special for baking them (of course, I assume everyone has flour, baking powder, soda, and eggs...).  And these type of quick bread recipes are not too fussy.  It will still come out good even if you make a few substitutions to use up what you happen to have in the house.  For example, I made this at my mom's...  she didn't have any whole wheat flour, so I used all regular flour.  No plain vegetable oil, so I used olive oil.   No buttermilk, so I used Greek yogurt thinned with a bit of milk.  Don't like any of the cultured milks? Any milk-like substance (soy milk, etc) will work.  It might taste a little different, but it will be good.  It will come out fine without the vanilla extract. In fact, the recipe that I used for inspiration called for oats (which was fine, but I didn't really like the texture), and no add-ins (like chocolate chips or walnuts).   One last tip:  when the bananas hit that speckled ripe stage, toss them into the refrigerator (this would be before the overripe all brown stage).  The skins will get dark, but the bananas will still be good for making bread for another week or so. 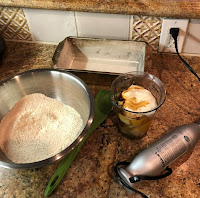 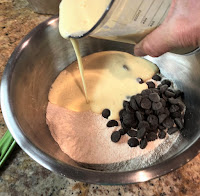 * If Greek yogurt, use a couple of spoonful’s of yogurt plus milk to make 1/3 cup.

Put the dry ingredients in a medium mixing bowl and stir to mix.

Put banana, eggs, milk/yogurt, oil, and extract in mixing cup of immersion blender, or in 1 quart measuring glass measuring cup.  Blend until mostly smooth  (don’t over blend, you don’t want a lot of air mixed in).

Pour wet into dry, stir a bit, add the chocolate chips, finish mixing together.  Don’t stir too much.   Scrape batter into the prepared loaf pan.

Bake for 55 – 60 minutes, until nicely brown and skewer comes out clean (you can also check with a thermometer, looking for 195 -200F)  .  Run a knife around the edge, and then turn onto cooling rack.   Let cool at least 10 minutes before slicing (an hour is better).   Once cooled, wrap loaf and store in refrigerator. 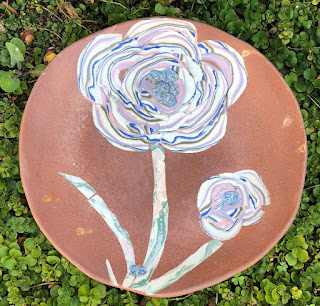 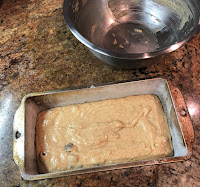 And this is of one of my recent platters...  colored porcelain inlaid on dark stoneware. 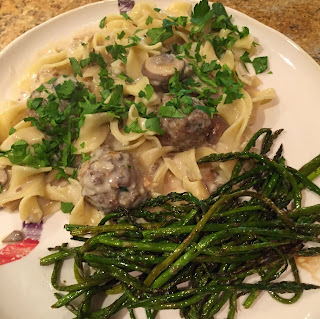 As promised, more ways to use old bread.

This is one of the meals that I used to cook with my mom growing up.  We ate a lot of hamburger.  There was a rotation that included spaghetti with meat sauce, chili mac, taco's, sloppy joes, and hamburgers for normal weeknight dinners.   Weekends might include pork chops or fried chicken, or occasionally steaks. Once in while a pot of stew, chili, or beans and ham hocks.  Duck and other game birds were also eaten weekly through the fall and winter, and fresh fish when someone caught some trout or bass.  There was always a vegetable to go with, and potatoes if not pasta.  We ate very well, most everything from scratch, with a few helpers like a can of soup (but never ever Hamburger Helper!).  From those days, I still have the habit of cooking dinner, at home, most nights.  And once in a while, I still want one of those hamburger based dinners.

In the path to eating less CRAP, I have cut out most of the shortcuts, like cream of something soup. Generally, the cream, the something, maybe some onions and broth will pretty much replace any of these. But I have done things that do make life a bit easier, like baking the meatballs. 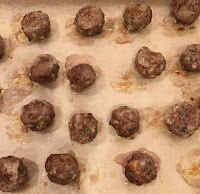 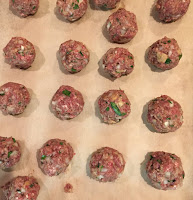 Before and after baking the meatballs

The bread is considered a "stretcher" to make the meat go further, but they are also key to getting the right texture.  I use fresh bread to make this, but you can substitute about a 1/2 cup of dry breadcrumbs, plus an extra tablespoon of milk.

But the big change is making the mushroom sauce from scratch, not starting with a can of cream of mushroom soup.  It is certainly more work, but not really hard.  And so much better. 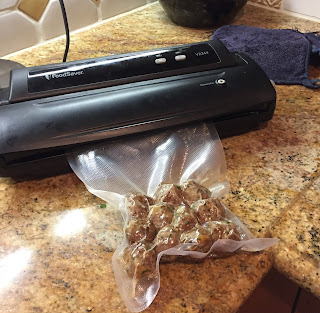 One last note....  If you make this with the full recipe, and plenty of noodles, it will feed 4.  For just the 2 us, I just use half the meatballs (and freeze the other half).  I generally make something green to go with (above with some roasted asparagus).  I make a few less noodles, but all the gravy (I like it saucy).  It feeds both of us and enough left for a lunch.

You can also freeze all the meatballs for a total do-ahead weeknight dinner.

Preheat oven to 400F (convection if you have it).  Prepare a sheet pan with parchment paper.

Once the meatballs are in the oven, you can start the mushroom gravy and pasta.  Or, the meatballs can be done ahead and refrigerated or frozen.

NOTE:   for just the two of us, I just use half the meatballs (and freeze the other half).   I make the same amount of pasta and gravy.

Heat oil or butter in large skillet, add mushrooms and onions, add salt. Place pot of salted water on to boil for noodles.  Sauté the mushrooms until they have released their moisture.  Sprinkle the flour over the mushrooms, stir and cook until flour is absorbed.  Add white wine, stir and let cook down, then add broth and stir well (if using cold meatballs, add now). Bring to a simmer.  Cook the noodles. Let the gravy simmer until the noodles are almost done, then add milk and warm meatballs.   When the noodles are done, drain and add to the meatballs and gravy.  Stir to mix, then taste, add salt and pepper as needed.  Sprinkle with herbs and serve. 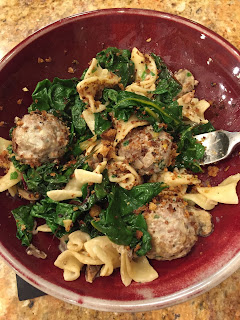 Leftover meatballs, heated with a handful of kale and Bread Crumb Topping.
Posted by Deb at 6:09 PM No comments: