Dinner for one: Chickpeas and Vegetable 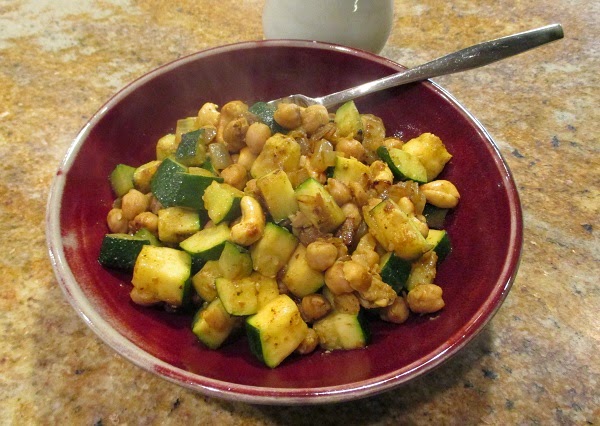 This is a recipe I'm not sure that everyone will like.  But the beauty of cooking for one is that you are the only one that needs to like it.

This is also a recipe that can be customized to your taste, and what you happen to have on hand.  I am showing this with zucchini, but it works equally well with broccoli or kale.  I'm guessing it would be great with eggplant (especially the long Japanese kind). I have used curry powder for seasoning, and I have used my southwest rub (equal parts chile powder, cumin, and coriander).  I'm guessing it would work with that jar of spice mix you got for Christmas that smells great but you are sure how to use.   Or skip the spice and use some fresh herbs and maybe some olives, like this version from Chocolate and Zucchini, which was my inspiration.  But I have to tell you, my favorite part is the cashews...  I keep a bag in the refrigerator special for this.

And don't worry much about measuring.  Put in about how much of each ingredient that you would like to eat.  Remember the vegetables will shrink, so put in plenty.  Taste as you go when you add spices and lemon juice.    If you want to gild the lily,  add some avocado or some fresh herbs on top. 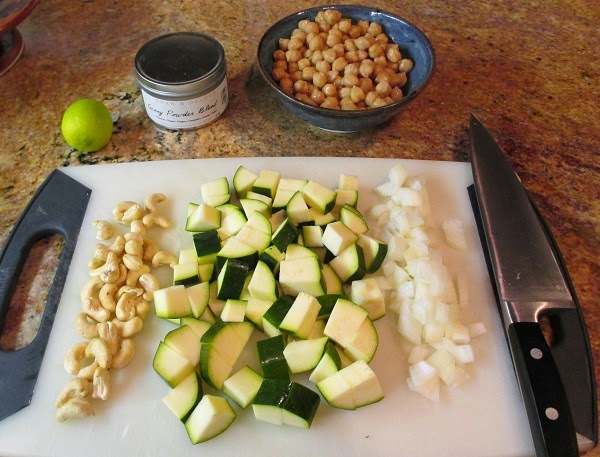 Olive oil (enough to nicely coat the pan)
½ a small onion, chopped
A good size serving of zucchini, broccoli, kale, or other vegetable (about 2-3 cup) chopped
½ can chickpeas (aka garbanzo beans).  Rinse and drain.
A handful of raw cashews (maybe a ¼ cup or so)
Salt  (skip if your seasoning mix has salt in it)

Optional:
Spice – curry powder, chili rub, etc.  to taste  (for my curry powder, I use about a teaspoon)
Herbs -- cilantro, parsley, basil

In a 10 or 11 inch pan, heat the olive oil over medium high heat.  Add the onion, vegetables, chickpeas, and cashews. Add a bit of salt.  Cook, stirring frequently.  When the vegetables are starting to cook, add the spice and stir to mix.  Taste a chickpea to see if there is enough spice and salt.  Continue to cook until the vegetable is just done.   Add a good squeeze of lemon or lime juice. 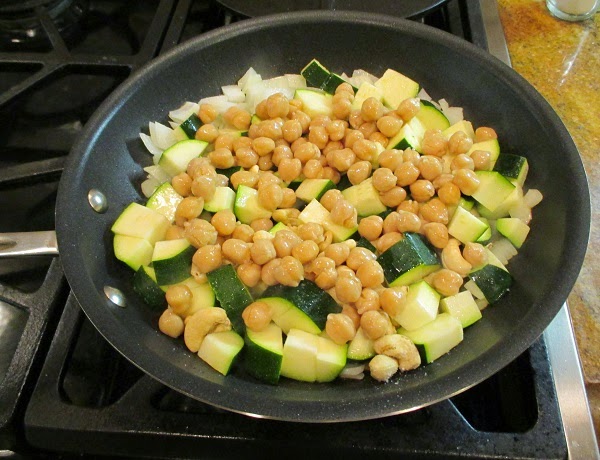 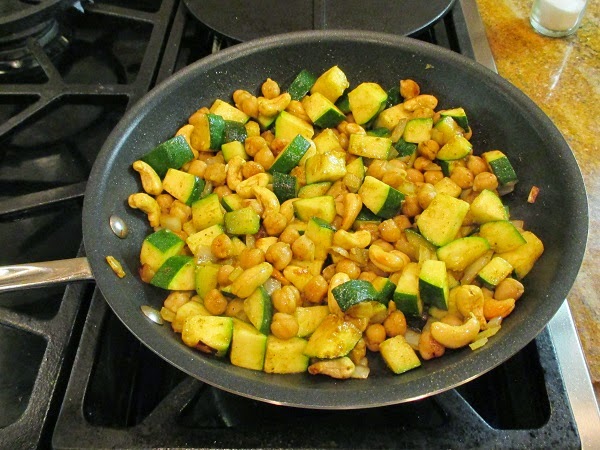 Happy New Year... Are you Doing a Cleanse?

It seems a very trendy thing to do this year..  the "1 Week Cleanses" run from the lemon juice/cayenne pepper/maple syrup regimen to only having juice for a week or so, to a "clean eating" diet (no booze, coffee, and about 1200 calories of day of real food).   Since the liver is what does most the cleansing in your body, I think the best thing you can do is consume less toxins for the liver to cleanse... not just for a week, but always. And I just can't fathom starving myself for a week!

I have an alternative suggestion... how about cleansing your kitchen instead?  I'm not talking about getting out the oven cleaner.  I'm thinking of getting rid of the the toxic food in your kitchen, plus any old foods that might be cluttering your freezer or pantry,

The goal is to reduce the temptation to eat less than optimum foods, plus have a kitchen that is easy to work in and a pleasant place to be.

Day 1:  Get rid of any Christmas cookies, candies, etc.  Put away the Christmas mugs while you're at it.

Day 2:  Clean out the fridge.  Beyond the obvious (anything fuzzy, squishy veggies, old dairy), take a look at condiments.  Any mustard or salad dressing that you have not used up in a year or so you probably won't.  Look at labels... seriously consider getting rid of anything full of crap*.

Day 3:  Clean out the freezer.  Get rid of anything that is icy and/or freezer burnt.  I also recommend getting rid of anything that is over a year old as it has likely significantly degraded in texture and flavor (although well wrapped or vacuum packed items are better longer if in a chest type freezer that doesn't have a defrost cycle).  Get rid of (or give away) anything that you don't like (even if its free range organic no sugar added).  Look at labels... seriously consider getting rid of anything full of crap*.   Get things that need to be eaten in the next month or two to the top and front, and make a plan to eat them.

Day 5: Clean out the panty.  Same rules here.. even if its still good, if you haven't used in year, will you ever eat it?  Give it to the food bank before it expires. Look at labels... seriously consider getting rid of anything full of crap*. Also take a look at inventory. Do you really need 8 cans of tuna?  If you at most eat 2 cans a week of tuna and shop most every week, then 3 cans is probably plenty.

Day 6:  De-clutter... maybe not tackle the whole kitchen, but take on one or two things that bug you - that drawer that won't open because it's too full, the corner that is full of who knows what. Plus make a trip to the food bank if you excess canned or packaged food.

Day 7: Make a meal using foods that are lingering in the fridge, freezer, and pantry, and a list of things to make and eat over the next few weeks.  Soups and stews can use up various meats and frozen veggies (in addition to broth that might be lingering in the freezer waiting for a rainy day), odd bits of pasta or bags of beans.

One of the things that seems to clog my freezer is broth.  Making your own broth is something that is considered to be essential for a serious cook, and most recipes seems to talk about making it a gallon at a time... using a big stock pot. And "bone broth" is trending as a super healthy food among the paleo crowd, it is supposed to be very good for healing the gut, restoring electrolytes, boosting the immune system, even getting rid of cellulite. There are even broth bars popping up where you get a cup of broth instead of coffee. I'm not sure that there have been any definitive scientific studies done, but can millions of grandmothers and their chicken soup be wrong?

But I have come to the conclusion that making big batches of stock is just not worth the effort. Cooking it is not a problem... but straining, cooling, and storing a gallon of stock is just not easy in the standard home kitchen. And more often than not, when I go to make a soup, I end up reaching for the 1 liter box of broth in the cupboard because either 1) I don't want to spend an extra 15 minutes thawing the broth 2) the soup is so loaded with other highly flavorful ingredients that I don't want to "waste" good broth, or 3) I forgot there was broth in the bottom of the freezer.  But I do still make broth... but in small batches, once in a while.  A quart or two at a time, and usually use most of it the day or day after I make it.  I save chicken backs and innards from when I cut up chickens, plus chicken carcases from roast chicken. It all goes into zip lock baggies and stored in the freezer until I'm ready to make broth.  One thing I have learned (after doing a freezer clean-out, where there were a bunch of chicken bags) is that you need a lot of chicken parts relative to water to make good broth.

Chicken Backs, necks, giblets (from 1 or 2 chickens)...  optional: include the skin (I do)
and/or  Roast chicken carcass (Again, 1 - 2 chickens worth)
1 or 2 carrots, diced
1 small onion, diced
1 stalk celery, diced (optional)
A sprig or two of parsley (optional)
1 to 2 quarts of water
1/2 teaspoon of salt

Put everything in a medium pot (no need to thaw chicken parts if they are frozen).  Add just enough water to cover.  Bring to a very low simmer (just a few bubbles) and cook for 3-4 hours.  Using tongs, pull out the big chunks and discard.  Strain the remainder into a large bowl.   You can either use the broth right away (and I don't bother to skim the fat), or chill.  The best way to rapidly cool is to put the bowl in a sink of cold water (adding ice makes it quicker).  When down to room temperature, cover the bowl and into the fridge. After its cold, skim the fat (which can be used to to saute some vegetables or fry eggs). It's best to strain again before using (and leave behind the sediment at the bottom). Store up to 3 days in the fridge, or to freeze, put broth (in 2-4 cup quantities) in 1 quart freezer ziploc's.

Now make some risotto or awesome chicken soup.  Or just have a cup of bone broth.